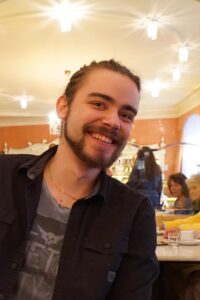 I spent eight weeks in Saint Petersburg interning at a modern art museum. I had been studying Russian for two years and my main goal of the internship was to improve my Russian, both in talking and when doing translations. The museum was planning a big exhibition project and my main task was to handle the conversations with a bunch of foreign artists and a curator in Italy. Basically I collected important information from them and planned the shipment and presentation of their works. I also translated an entire exhibition catalogue with hundreds of works, a few legal contracts, and two press releases, all from Russian to English.

I’ve probably never enjoyed a workplace as much as this museum, as the colleagues were all very welcoming and friendly, and I really enjoyed my tasks. I was a bit nervous in the beginning with translating the legal contracts, as I’ve never done that before and don’t have any experience in law. However, my mentor and colleagues were very helpful and they had a person who was proficient in English and used to legal documents who proofread everything before it was sent.

During the final two weeks of the internship, there was a lot to do for my colleagues and the workplace, unfortunately, wasn’t very big. This meant that since I already had done most of the work with the catalogue and had collected almost all the information needed from the international artists, there wasn’t very much for me to do, and my mentor was too stressed to help. But in the end, I got to translate another press release, and from time to time I could translate smaller things for the catalogue.

Regarding the life in Russia and Saint Petersburg, I had already lived there once for three months, so there wasn’t anything new added to my impression. I can definitely recommend moving to Saint Petersburg for a time, even if these two times have been enough for me. There’s a lot of museums and beautiful places to see, and a lot of very nice people to meet (especially if you know the language). People in certain kinds of work, such as stores and public transport can seem a bit rude in the beginning compared to those in western countries, but you get used to it and it even has its charm.

ProfIntern was an organization that I found when I was trying by myself to find an internship. When I noticed that I would have needed to start earlier, I decided to contact them. They did an amazing job finding a good internship, and if you want to find some place that fits you in Saint Petersburg or Moscow, I would definitely recommend contacting them, as they seem to have a big network of contacts. The visa invitation was also sent without any problem, and they were quick to answer me if I had any questions. Unfortunately, I can’t recommend ProfIntern’s accommodation service at all for several reasons. A lot of it is my fault, as I should have asked the local people that I know what prizes are okay in what areas of Saint Petersburg. But I didn’t, and when I was in Saint Petersburg and told my friends and my girlfriend about the prize of my room, they were in absolute shock and told me that I basically had been scammed. My girlfriend showed me a bunch of apartments which were twice as cheap as the single room that I was paying for, and we found the same prizes when we asked a bunch of friends who were living or had been living even for short periods in Saint Petersburg. The first room I got was in an apartment where you basically couldn’t walk or move around without horrible screeches from the floor and furniture. My room was very small and the bed was incredibly uncomfortable. I would have been fine with this, if it wasn’t for the insane cost that I was paying for this single room.

When I first contacted ProfIntern, my main wish regarding the accommodation was that my girlfriend could sleep in my room as well during my stay. ProfIntern arranged with the landlord so that she could stay 10 times per month, and I would have to pay an extra sum for her to be living these ten times in my room. Very strange arrangement, but it was too late for me to find something else, and I counted on that this was the best arrangement they could find. It was a shame that the bed was too small for the two of us to sleep in, which pretty much made the arrangement pointless. I complained and got a new room in the same apartment, which was bigger and had a sofa, which was a little bit bigger than the previous bed. This sofa however was even more uncomfortable than the bed, which isn’t what I wanted to pay for with such an insane price.

ProfIntern didn’t let us find anything on our own even for the upcoming month, but they promised that I could move to a room in a better apartment the following month, with a double bed and where the landlord was fine with my girlfriend living for the entire month without any extra prize. This apartment was indeed a lot better, cleaner, and more modern. Our bed was comfortable and I can understand the price a little bit more as the landlords cleaned the apartment every single day, didn’t live in the apartment with us and the other residents, bought toilet paper and washing powder constantly and always had coffee, tea, and spices for cooking in the kitchen which we could use. It was a bit more like a hotel. What I don’t understand is why we weren’t offered this place immediately if my main wish was for the two of us to live together, and instead were offered a tiny bed in which my girlfriend only could stay for a limited amount of times.

I had a few arguments with ProfIntern regarding all of this, and they said the cost was so high since my rooms were very central, things such as furniture, wifi, and sheets were included, and because the landlords cleaned the apartments. However, the apartments that we found and that our friends talked about weren’t that much further away from the centre, wifi in Russia is not expensive, and furniture were even included in some of these places. To summarise, I can definitely recommend ProfIntern for finding an internship, but unless you’re okay with paying an overprize and feel very uncomfortable with finding something on your own, I can’t recommend using their accommodation service.