Home>>Reviews>>My internship in St. Petersburg was connected with ecology, the right to fight against global warming, pollution and climate…

Program: Individual internships
Extra: Excursion package, How to find yourself in Russia? 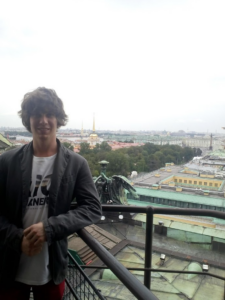 My internship was connected with ecology, the right to fight against global warming, pollution and climate change. For 3 months, it is not really enough to grow professionally as experts say, however, I can surely confirm that the differences between my educational experiences and labour experiences are obvious. It remains positive for every young candidate/student from abroad to experience a foreign internship with basic language knowledge. I have no regrets to have decided to let an internship of 3 months take place in my summer holidays. I am sure that it managed to enrich my CV which can be very useful for my future professional opportunities, projects and everything. It was an essential decision to invest time in my ‘’butterfly-effect way’’. I am very positive about all my convivial colleagues. They possess strong abilities in collaborations, negotiations, tolerances and organisations. We never had a single stress period with hurrying deadlines or someone with an autocratic attitude within the team. Enjoying, going out, laughing and hugging with them occurred regularly. My work experience at my office was never stressed. I had many possibilities to discuss with my colleagues about tasks without any difficulties. My tasks also were never a burden, never gave me a ‘’Karoshi’-like feeling». It corresponded very well to my expectation, my ‘’savoir-faire, savoir-être, savoir-agir’’.

to create, plan and prepare some posters, videos, cartoons and question lists for the company’s next exhibition (it corresponds to the project on environmental education),
participating in environmental activities outside SPB,
to create several reports (writing a few articles) about over-consumption and pollution in my country and Latin America.
collecting several studies to turn into one clear concise article before posting it on the company’s site.
ABOUT LIFE IN RUSSIA

My stereotypes about Russia were very famous throughout the world, the majority of them come from the internet. What we all learn from Russia without visiting, is that Russian people have a talent for doing silly things like fighting with a bear or Russian women who look like 70 years old while they are still younger than 30, Russian babushkas weighing at least 300 kg and measure 2 meters 30cm. According to me, Russia has the most stereotypes imagined by foreigners because of Hollywood movies and the Internet. That is what regular people tell about things happening in Russia.

Another stereotype from the media is that we only hear negative things about Russia like it will soon invade Europe and annex every territory all the way to Lisbon, but it never happened. Also, the Western media still inform us that Russia is more belligerent than the USA.

Before my arrival in Russia, I honestly thought that Russian people would have less sense of humour, would be more serious, colder (don’t like hugging or being touched by a part of a body pasted with the other’s body part like shoulders) than in my hometown. I also include in this paragraph that Russian people might be less handsome than people from Southern Europe (my impression before my first arrival), but I was wrong because the Russian physical beauty is more attractive than the Dutch physical beauty, which inspired me absolutely.

From my experiences here in SPB, I have no feelings of being threatened or something negative with Russian people as they are more extrovert, and often more generous than in my country. My stay here gives me a pleasant feeling just like my hometown. My stereotypes about Russia have never been as strong as they are often created by Western media. I am happy that a large number of people from Western Europe see that stereotypes are usually false.

My general impression of Russia as a country, it’s people and mentality: in Western Europe, we can regularly see and read in the media that there are hardly any positive news items about Russia because of a strong bias towards American politics. I of course know that it is completely a lie that Russia is a global threat. It is just a normal European country like Germany or Greece and we shouldn’t fear an unexpected Russian invasion. The country is indeed a liveable place for every nationality as life there is not that different from other developed countries. My interest in Russia has increased before my project to pass an intern here. I’m really happy that Russia isn’t that far away from Europe’s main cities, so, that is why returning to Russia is rather easy (3 hours by plane). My dream to see Russia and to be here for 3 months absolutely made me happy. It was a child’s dream that came true. I finally am able to decode the country’s image, view and reality. Next time, I would wish to come back to visit several places such as Kazan, Nijni Novgorod, Siberia and other cities in the east.

Regarding Russian people, I never expected that their hospitality would be so overwhelming. It feels like ‘’helping people being lost’’ is their leisure. Altruism in Russia is well-established (better than in Western Europe, honestly), which gives me a real feeling of faith in humanity. I can understand that it is not always easy to talk with people about political subjects or making jokes about the country which would risk hurting them emotionally. Maybe it could happen — even if I haven’t experienced this — that when a Russian person sees how we follow our daily routine, this could cause a miscommunication or a little small culture shock. In a conversation with a girl from SPB living in the same city as mine, I noticed that she was surprised about how I replied to an exercise (short direct and clear answer). For her, it is normal to reply while nattering (a long answer with very thin information). It almost caused us a polemic by our cultural difference. It also occurred while I was concentrating on an article I was working on, one of my colleagues from the company advised me to type between 5000-6000 characters, for me, it was an exaggeration, but for him it was normal.

Did I fully immerse in Russian culture? No, not really fully, only to a certain extent. I think that there are no major differences between Russian and French culture (only people touch each other less in Russia and hug less than in France). The culture shock didn’t affect me at all during my period in SPB. The adaptation to Russian culture was not really troublesome. Although I feel very pleasant that the country’s altruism belongs to one of the most important aspects of daily life.

Concerning ProfIntern, it is one of the most motivated organisations I have ever seen. The communication between ProfIntern and a candidate who is looking for an intern in Russia is very fluent and easy-going. The organisation stays in contact from the beginning to the end which gives me the feeling of enormous confidence in it. I never hesitated to ask for help or assistance, etc. When I met Maria and Anna for the first time, they are joyous, extrovert and optimistic individuals. During the first personal meeting, I could already confirm that any doubts, feelings like being lost or nervous were absent. The functioning of the organisation is really extraordinary and better is not possible as for me it gets the highest rate. Maria and Anna have always helped me to keep in secure contact with them. I chose ProfIntern because I planned to enrich my CV by passing an intern in a foreign country and Russia has always been my favourite country to visit since my childhood, so I found the organisation by accident on Internet. All its available offers attracted me enormously. So, one can say that we have many different alternatives to choose from. There are also activities (inside SPB and outside SPB) available on ProfIntern’s site. If I meet someone who asks me something about Russia, I will oblige myself to not forget to include ProfIntern in my experience for this person to explain something about my trip.

Read the articles of and about Jérôme: Thirst for learning knows no boundaries, Life in Russia beyond expectations, Russian superstition a foreigner does not know about, Broken stereotypes about Russia.