Home>>Reviews>>The team was extremely welcoming. My manager and nearby coworker quickly became good friends of mine.

Program: Learn Russian and get professional internship in any field, Individual internships 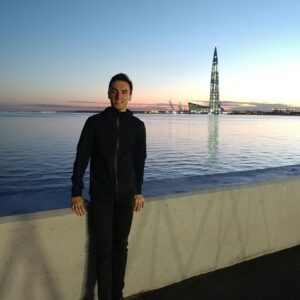 My internship was connected with international business and expansion in a company which provides photography products worldwide. My tasks largely consisted of English language translation/proofreading, due to my status as a native English speaker. I also contacted potential clients in the United States to open dialogues with them which could lead to future deals.

The team was extremely welcoming. My manager and nearby coworker quickly became good friends of mine. We often shared cultural knowledge and had great discussions about the differences and similarities between our two countries. The company’s attitude was different than what I am used to in my home city; the team was mostly young and much more casual than the teams I had encountered in New York. I felt that the level of professionalism was somewhat lower than what I had come to expect at home. The top managers and owners often arrived quite late, and punctuality was not enforced strictly. Dress codes were almost non-existent. However, professionalism is subjective, so the experience greatly opened my eyes to standards of business practice in other industries and countries. Unfortunately, it seems that I arrived at an off time for the company, as managers were on vacation for the beginning of my experience and there were several significant shifts in team membership during my time as an intern. As a consequence, my tasks were not a main priority for the top managers and I did not produce the results I had expected since I was not given regular guidance.

Immersion was wonderful. Working full-time at a Russian company not only afforded me the chance to experience Russian business life but Russian daily life as well. The team members I interacted with regularly were more than happy to explain anything and everything I had a question about with regards to Russia and its culture. They taught me new Russian language phrases and excitedly directed me towards good local restaurants. They were also never afraid to address more sensitive questions, such as those about religion or politics. Due to this, I believe I was able to immerse myself in Russia at a rate that I would not have been able to accomplish had I not chosen to intern there.

My internship was in the international business department. I worked on company manuals and advertising materials as a consultant on English language matters. I advised top management on business practice in my home state of New York. I also regularly called and e-mailed prospective clients in the United States, trying to establish relationships which could lead to the purchase or operation of our products.

As an American of Slavic-Orthodox background who comes from a largely Eastern European neighbourhood in New York, I believe that I did not have any wild stereotypes of Russia or its people. Rather, I had reasonable expectations of the country which were all met or exceeded. Russians are an amazingly welcoming people with solid principles and deep souls. Though they are not initially as warm as Americans, they are always ready to help you in a time of need. They are also philosophically quite rich, and many Russian people I encountered found pleasure in discussing the greater questions in life. Russians are honest and direct, and once they consider you a friend, they will go to the ends of the earth for you. They also have a traditionally-minded culture based on respect, which to me feels comfortable and well-organised. Some prevailing social views in Russia run counter to what is believed where I live, so it was enlightening to hear Russians discuss social issues from a completely different perspective than my own. Most of all, I liked the deep history of the Russian nation, which resonates strongly throughout the country even in modern times.

I chose ProfIntern because it was a well-regarded service that linked up nicely with my experience at a separate Russian language institute. ProfIntern was helpful, checking in every now and then to see how I was doing. I would definitely recommend their services to anyone interested in Russia and interning there.

I hope this helps you guys with your future endeavours!